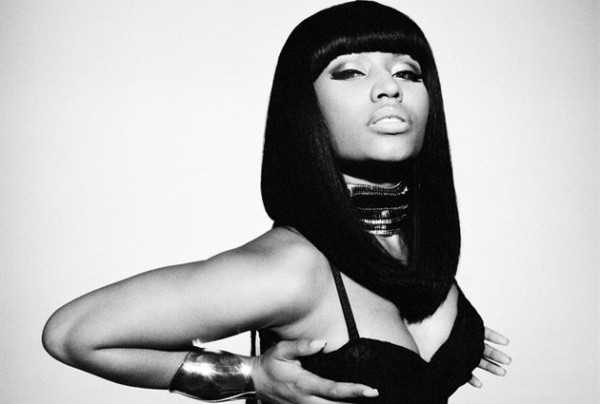 Last night at midnight, anyone who was partying coherently enough to check their mobile devices, or dancing in the presence of a DJ in the know and with a wi-fi connection, might’ve heard Nicki Minaj’s latest Eminem-featuring Swizz Beatz-produced anger anthem, “Roman’s Revenge”. As October 30 turned to Halloween, Minaj AKA Roman Zolanski AKA Young Money’s First Lady tweeted fans to check iTunes, where upcoming debut Pink Friday had appeared available for pre-order, complete with a full tracklist and one track available for immediate download, the aforementioned “Roman’s Revenge”. And upon close consideration of these new insights into Pink Friday, it seems Feed the Dog is in need of some tongue-biting. First of all, previously blogged track “Blow Your Mind” (officially “Blow Ya Mind”) is indeed included on the debut. And not only that, but upon one quick listen of “Roman’s Revenge” it becomes infinitely apparent that Minaj has no intentions of shying away from the hard and the dirty on her new record.

While Nicki certainly does work on the insistent, simplistic Swizz beat, Eminem steals the show on “Revenge” with what is potentially his most insane, spotlight-stealing guest verse since “Still D.R.E.”. And by placing herself side-by-side with hip hop’s most notorious mental case, Minaj’s own crazy seems that much crazier, somehow legitimizing her funny-face-flow into something beyond a novelty, opening us up to the possibility that the female rapper’s bizarre techniques could actually be changing the game. Reminiscent of a time when Eminem himself was making the world realize he was much more than some squeaky-voiced white boy, listen to Barbie tear it up on “Roman’s Revenge” below, and keep an eye out for Pink Friday, due out November 22nd.